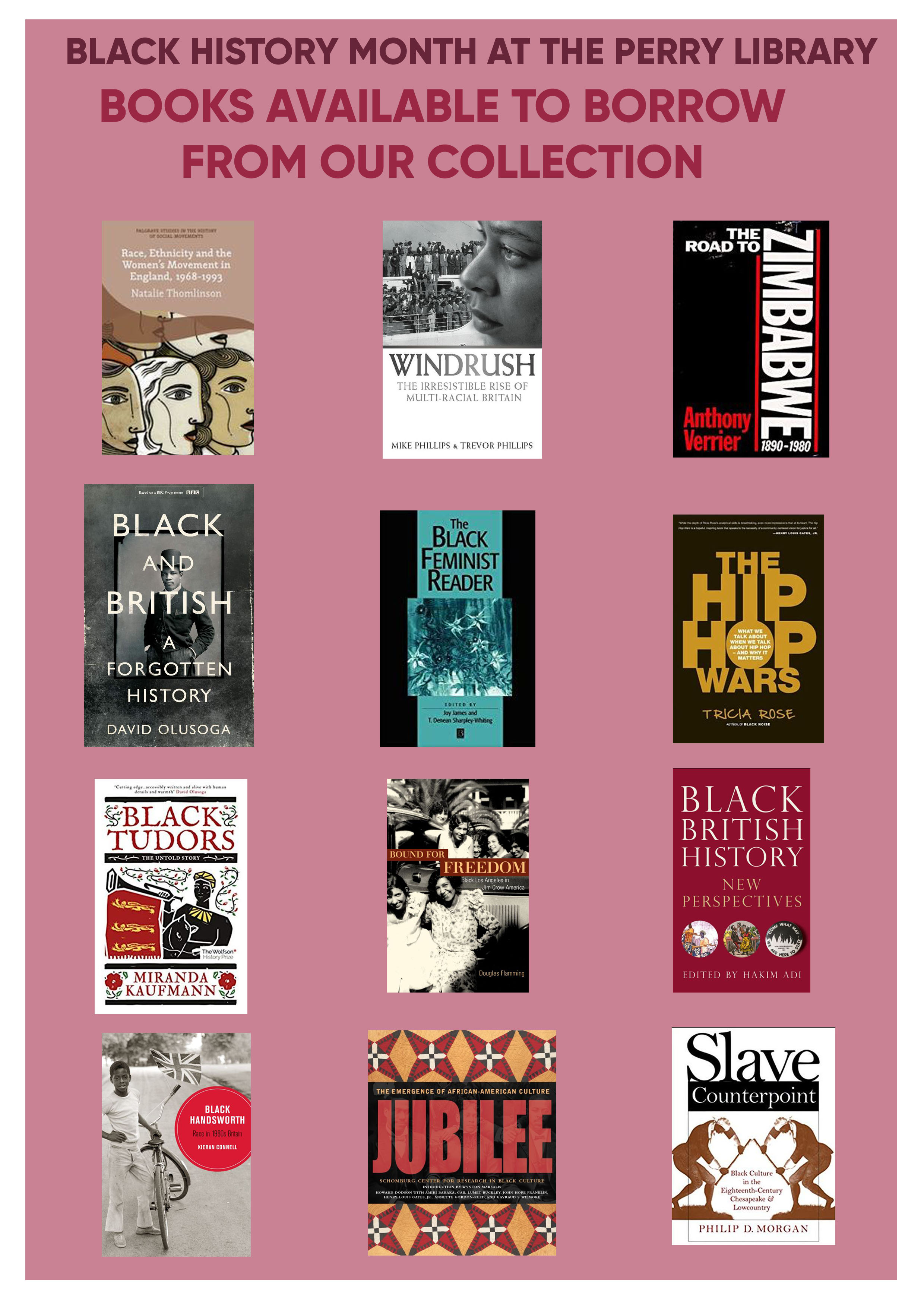 In our final post for Black History Month, we thought we’d look at just a few of the books that the Library has that could help you explore different aspects of Black History. All of them are available in the Perry Library and if you browse the shelves around them you’ll find many more - these were just a few that we picked out.

This was a book of the year in 2018 for both the Observer and the Evening Standard. Dr Miranda Kaufman has found stories of free Africans in Tudor Britain and written about the lives of 10 very different people. Find it on the catalogue here.

Race, Ethnicity and the Women’s Movement in England, 1963-1993 – Natalie Thomlinson

This book is the first archives based account of the debates around race in the “second wave” period in England. Natalie Thomlinson researched using oral histories and original feminist magazines to unpick the tensions between Black and white feminists, and the book speaks to many present day concerns within the women’s movement about the politics of race. Find it on the catalogue here.

This is an older book, published in 1986, looking at the history of the emergence of Zimbabwe as an independent country as opposed to a British colony. Verrier argues that all British governments supported whites in Rhodesia and that British liberalism is a myth, backed up with interviews and archives. It’s one of several books about Zimbabwean independence that we have, you can browse the catalogue here.

Although this book was published in 1998, the story of the Windrush has had public prominence recently due to the scandal of records of Windrush passengers having been destroyed.  This book opens with the memories and impressions of people who were on that first voyage and continues through the witness of their descendants, friends, neighbours and others. It concludes with a portrait of multi-racial Britain today and celebrates Black British heritage. Find it on the catalogue here.

Hip hop can be controversial, and Rose argues that the controversy is worth paying attention to because it’s become a way in which race in the United Sates is talked about. The book explores the crucial issues underlying claims on both sides, like questions of violence and sexism. Find it on the catalogue here.

This is another book about culture and Black history, this time looking at regional black cultures in the colonial American South. It also shows that, even whilst they were victims of a brutal, dehumanising system, enslaved people still preserved their humanity by creating culture. Find it on the catalogue here.

This is an edited collection of essays on numerous different aspects of Black history in Britain, including African and Caribbean servicemen in Britain, the New Cross Fire of 1981 and its aftermath and empire, race and power in eighteenth century Britain. The essays originate from a 2017 conference which aimed to showcase young and emerging scholars, particularly those of African and Caribbean heritage based in Britain, and all but one of the contributors are currently based in the UK. Find it on the catalogue here.

Another volume of essays on our list, this brings together ten key essays on the development of black feminism. The book explores issues of community identity, justice and the marginalisation of African American and Caribbean women in literature, society and political movements. It includes an essay by Angela Davis, who was referenced in our first Black History Month blog post, and another by Toni Morrison. Find it on the catalogue here.

The first full account of Los Angeles’ Black community in the half century before the Second World War, this book details community life and political activism at a time when Los Angeles was growing from a small town into a sprawling metropolis. The book also asks what freedom means, and how gets to be free and why? Find it on the catalogue here.

Produced to tie in with the TV series (which you can find on Box of Broadcasts), this book explores the long relationship between the British Isles and the people of Africa. It includes African Roman soldiers at Hadrian’s Wall, Black sailors fighting for Britain at the Battle of Trafalgar and Queen Victoria’s Black god-daughter, as well as the shaping of Black British Identity in the 20th century. Find it on the catalogue here.

Handsworth is an inner-city area of Birmingham, and this book looks at case studies of Black and political groups, culture and leisure that show how the culture of the Windrush generation and their children was influenced by their heritage. The book takes readers inside the social clubs, political organisations and pubs of 1980s Handsworth to shed light on the everyday lives and experiences of Black residents and how these reflect post-colonial Britain. Find it on the catalogue here.

Jubilee: The Emergence of African-American Culture – Schomburg Center for Research in Black Culture

The final book on our list looks at the culture of African-Americans which emerged from the legacy of slavery. The word “Jubilee” means the day of freedom and signifies celebration, and the book looks at the ways that the diverse groups brought to the United States as enslaved people forged their own identity. Find it on the catalogue here.

All of these books and many more are available to borrow, and there are many different aspects of Black History which can be explored. Black History Month is just a starting point!