Black History Month: What do we know about the experience of BAME students at LSBU in the past?

Our student publications are one of the best ways of tracing what our students were passionate about, and the magazines from the 1970s and 1980s are particularly good for this. They’re full of political comments, both on national politics and internal college politics, as well as some surprising recommendations on student life (for example, hitch-hiking is recommended as a good way of getting around in the student handbooks, we don’t recommend this advice now!). Reading them also starts to give a picture of what life at LSBU (formerly known as South Bank Polytechnic) might have been like as a BAME student. 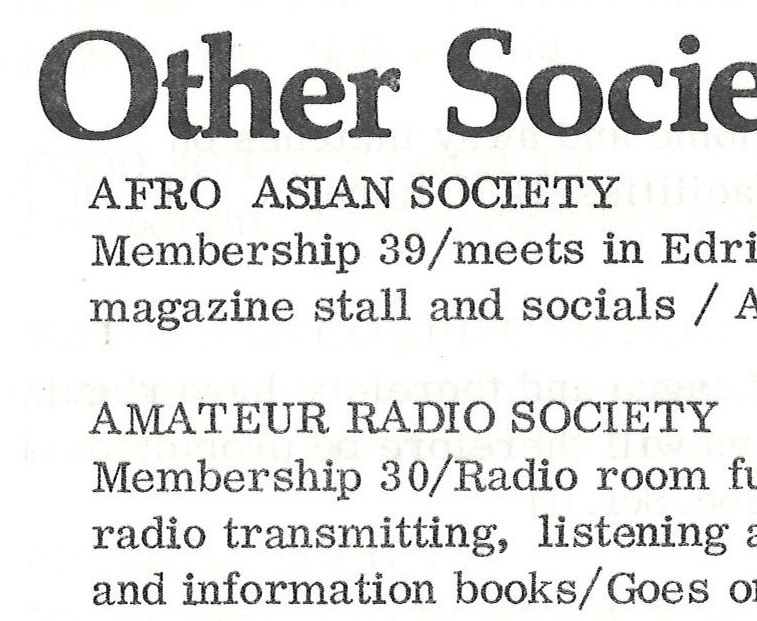 The 1974 student handbook is full of information about how to handle student life – including the advice mentioned above. Part of this is a list of all the societies, which is where this snapshot describing the meetings of the Afro Asian Society comes from. The society met once a month, so lectures, film showings, a magazine stall and socials. Membership was 39 shillings, slightly more than the Arab Friends society which was also advertised in the handbook – they cost 37 shillings a year. The handbook also gave tips for social clubs in London that might be useful for overseas students, including the Africa Centre in King Street and the Royal Commonwealth Society in Northumberland Avenue. 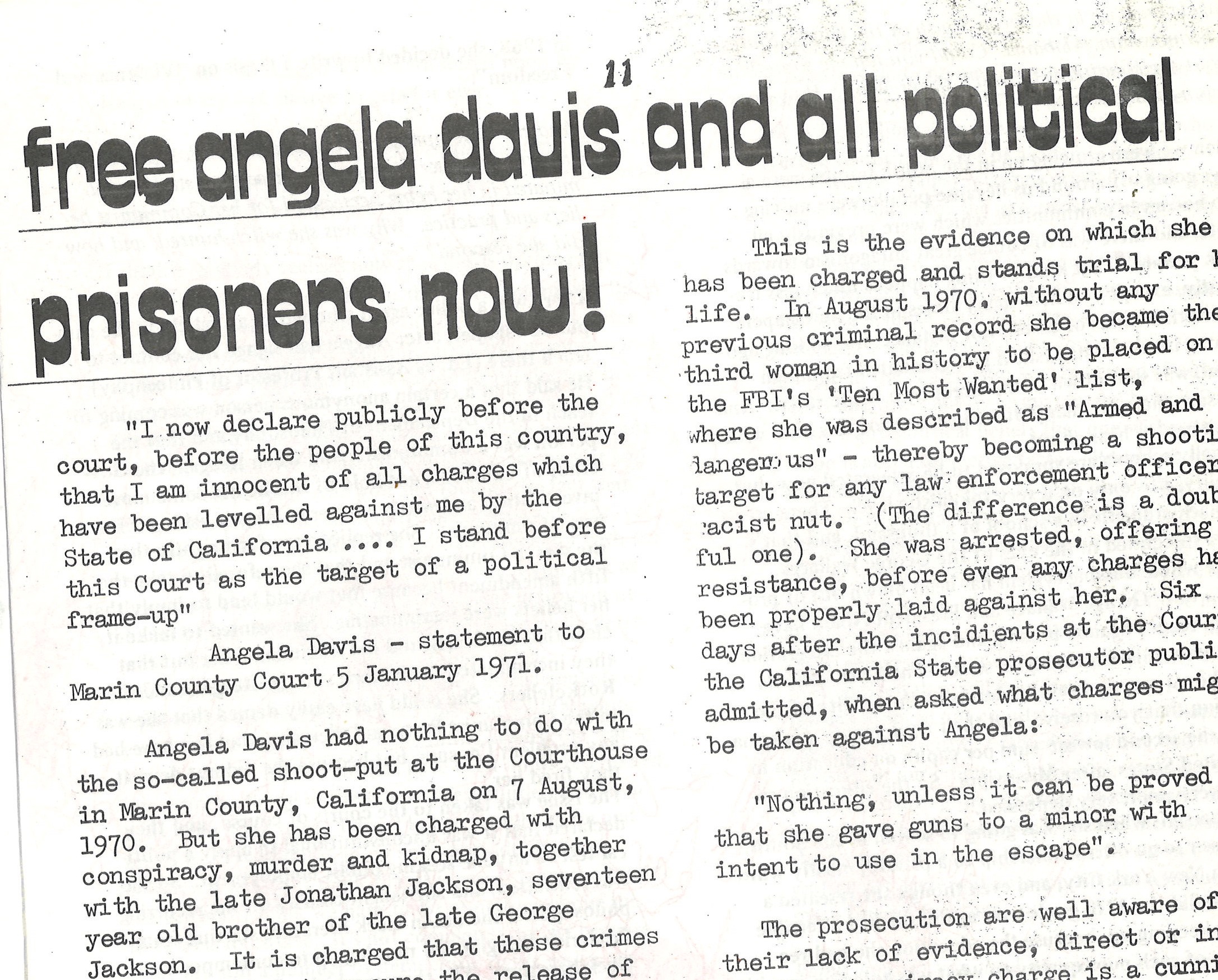 The student magazines are a good source of finding out which political campaigns our students were involved in. In 1971, Klap’s very first issue ran an article about the campaign to free Angela Davis, and a full two page interview with her sister, Fania Jordan, who was visiting the UK as part of the campaign. Angela Davis is a black academic and political activist, who was arrested after her personal security guards used firearms she had bought in an armed takeover of a courtroom, and Klap described her as “a symbol of resistance to tyranny and oppression”. We don’t know much about the student who interviewed Fania, other than that she was called Janet Hadley, as Klap didn’t give anyone a byline photograph. Janet also had a chance to respond to letters disagreeing with her article in the following issue. 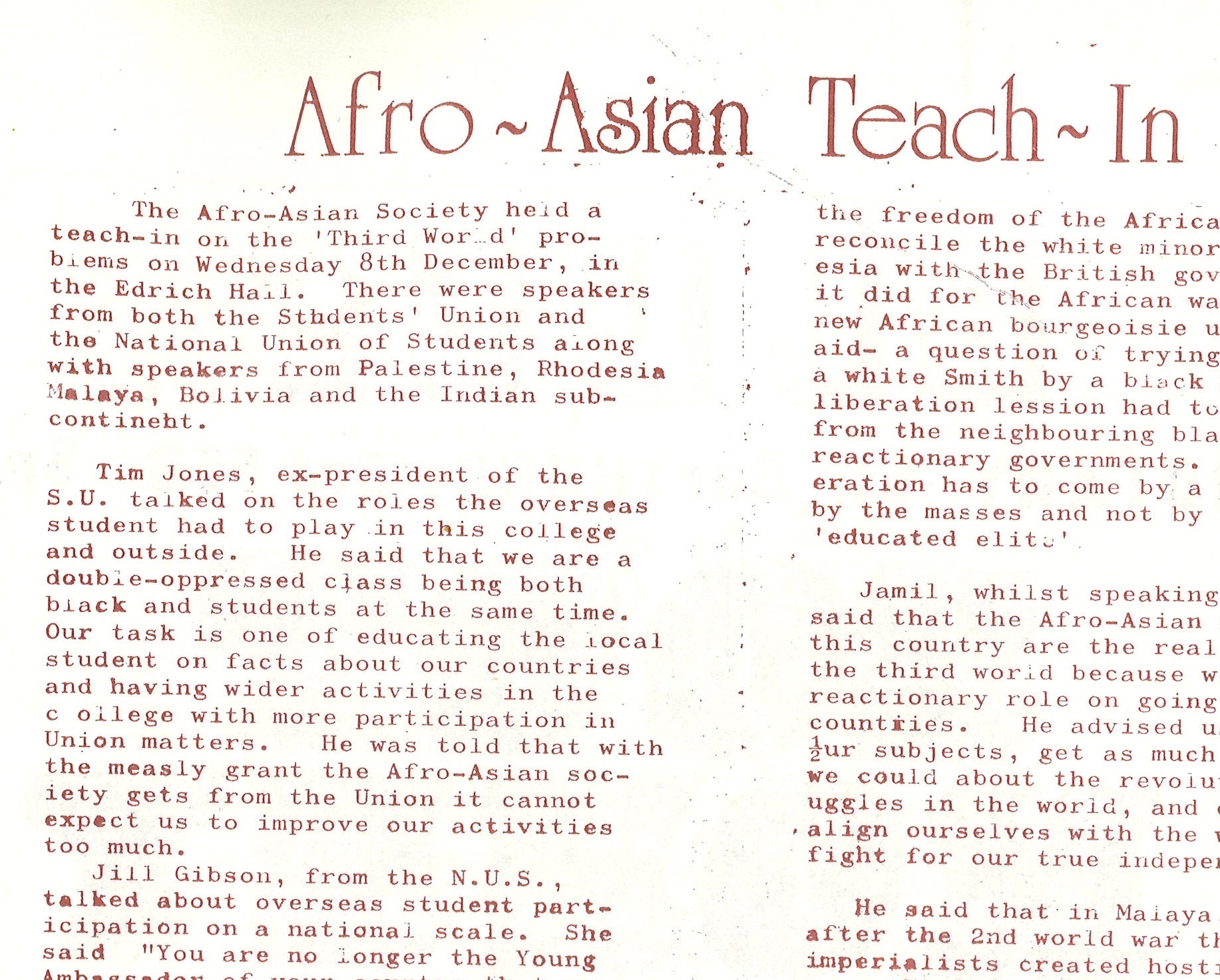 The Afro Asian Society also make an appearance in Klap, as issue 3 reports that they held a teach in on the “Third World” in the Edric Hall in December 1971. There were speakers from the Student Union, the NUS and “Palestine, Rhodesia, Malaya, Bolivia and the Indian subcontinent” – this in itself tells us a little about current attitudes in the 1970s, as it is before Zimbabwe became independent so the old colonial name was still in use, despite the summary of the talk referring to Zimbabwe throughout. The magazine gives summaries of all the talks, and says that 250 students came to the afternoon session! 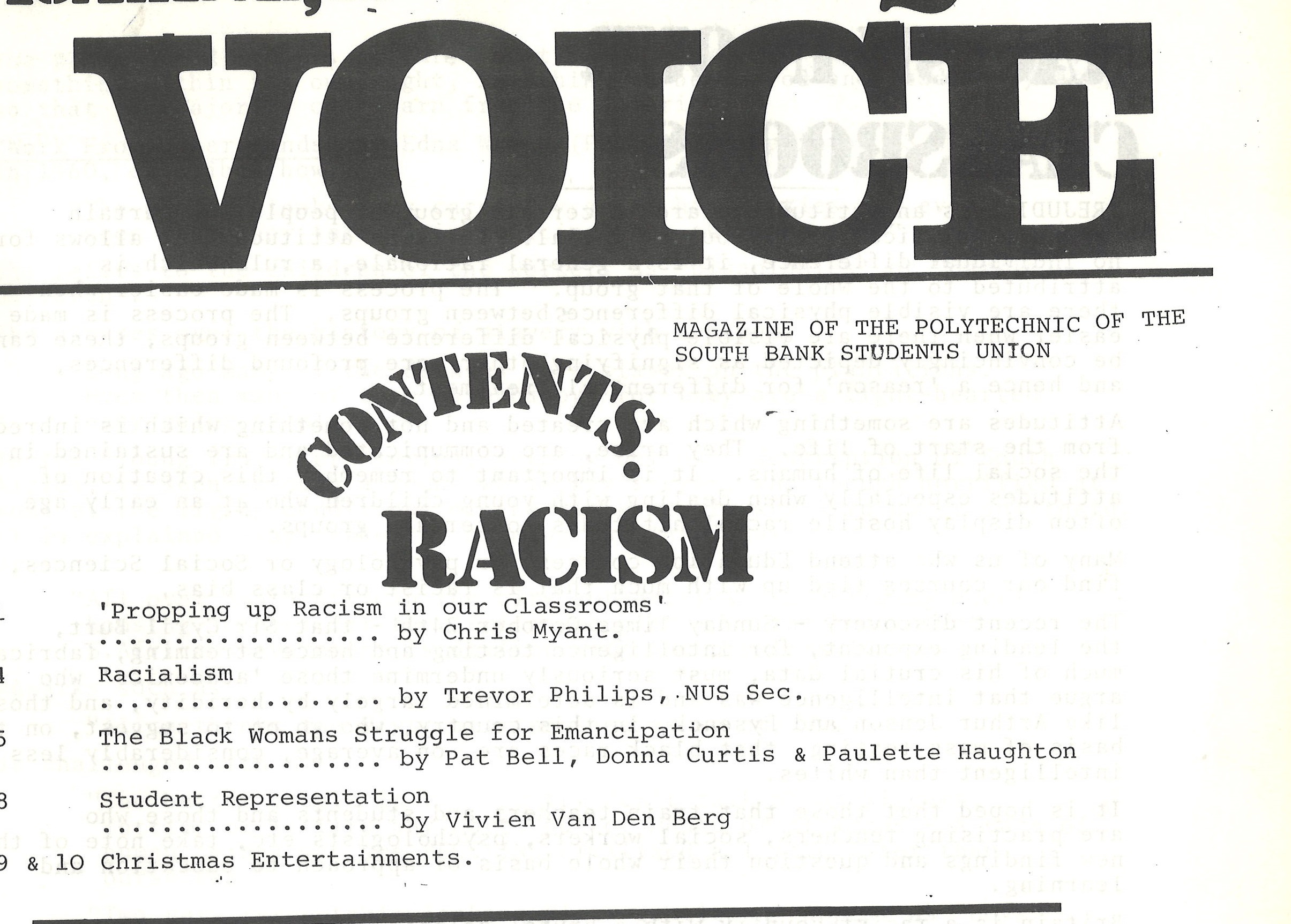 Finally for this post, the 1976 student magazine Voice did an entire issue on racism. Articles included one on racism in classrooms, which commented on teaching materials and many children’s books that were available in the teaching section of the Polytechnic’s library, explaining why this was an issue and recommending further reading. Member of the NUS Executive, Trevor Philips (later chair of the Commission for Racial Equality and the Equality & Human Rights Commission) wrote an article on racism, where he stated that “the sensational and biased reporting of both the popular and quality press has also contributed”, and another article discussed the black woman’s movement. It finished with the words “POWER TO THE SISTERS IN THE DIFFICULT, JUST AND UNIQUE STRUGGLE”, and was followed in the magazine by the UK wide student pledge against racism.

There is much more to be found in the magazines, but limited space means we’ve only looked at a few examples. Student handbooks and magazines are all available to consult in the University Archives, you can find out more by emailing archives@lsbu.ac.uk